Hello fellows, I hope you are doing great. In today’s tutorial, we will have a look at Introduction to Zener Diode. The diode is an instrument that has two terminals called cathode and anode used for conversion of AC into DC current. For conversion of AC into DC, rectifier circuits are used there are two types of rectifiers are used first is half-wave rectifier and the second one is a full-wave rectifier. The process of ac to dc conversion is called rectification. The normal diode operates in forward biasing condition current flows through it and in reverse bias condition current does not flows through diode.

There is a special purpose diode that operates in both reverse and forward biased condition that known as Zener diode. In today’s post, we will have a detailed look at its practical applications and used in different instruments. So let’s get started with Zener Diode Applications. Zener Regulation From No Load to Full Load 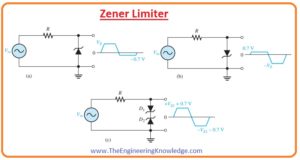 How to use Zener Diode For Meter Protection

How to use Zener Diode for Wave Shaping

So friends that is complete post about Zener diode applications if you have any further queries about this post ask in comments. Thanks for reading. See you in next post have a good day.