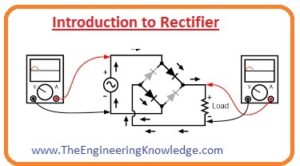 Hello, friends, I hope all of you are enjoying your life. In today’s tutorial, we will have a look at Introduction to Rectifier. The rectifiers are such circuits that used to transform alternating current into the direct current. There are numerous electronic devices that operate on the DC current but in our electrical system AC voltage is generated. To make useable these voltages for devices that operate on the dc rectifier circuits are used. There are 2 types of rectifiers first is a half-wave rectifier and the second is a full-wave rectifier.

Before the invention of the rectifier created with the silicone semiconductor vacuum tube thermionic diode or selenium rectifiers were used. But with the invention of semiconductors diodes vacuum tube diodes were become rare to use. in today’s post, we will have a detailed look at its working, circuits, types and some other related parameters. So let’s get started with the Introduction to Rectifier. 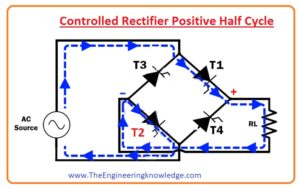 So, friends that are the complete tutorial about the rectifiers, I have mentioned each and every parameter related to rectifiers. I hope you enjoyed this tutorial. Have a good day. see you in the next post. Thanks for reading.