Hello, friends, I hope all of you are enjoying your life. In today’s tutorial, we will discuss What is Half Wave Rectifier. The diode is a device that used to transform ac current into dc current. The circuit used diodes to convert AC into DC is known as a rectifier. There are normally two types of half-wave and full-wave rectifier. In half-wave rectifier,a half cycle of ac waveform is transformed into direct current and in full-wave rectifier, both cycle or complete waveform of AC current is transformed into the direct current.

In today’s post, we will have a detailed look at half-wave rectifier its circuit, applications, and some other related parameters. There are mostly electronic devices that operate on DC as our power system is AC. So these rectifier circuits help us to operate these devices. So let’s get started with the Half Wave Rectifier. 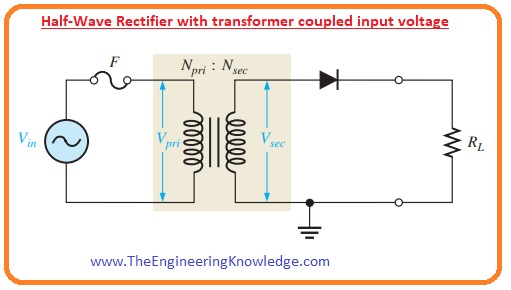 Difference between Half wave and Full Wave Rectifier So friends that is the detailed post on half-wave rectifier I have each and every parameter related to the half-wave rectifier. If you have any queries about this post ask in comments. Thanks for reading. See you in the tutorial.