Hello guys, I hope you are doing great. In today’s tutorial, we will have a look at Diode Clamper Circuits. In a previous tutorial, we discuss the diode limiter circuits that limit the value of input ac waveform to the desired value and cut the signal above that level. While clampers are such circuits that vary the DC level of input ac signal from one point to another but not vary the level of signal similar to the limiter. In simple words, these circuits shift the positive peak and negative peak of the input signal. For this shifting DC, a component is added or minus from input signal according to the shifting position of the signal.

If a signal is to be shifted above the center-line of wave clamping circuit add the dc component and if the signal is to shifted below the center-line than the clamper subtracts the dc component from the input ac signal. If the clamper circuit shifts the input signal to above of the center axis than it called positive clamper. If the clamper shifts the signal below the axis then this circuit called negative clamper. The circuit arrangement of clamper is alike to the diode limiter or clipper circuits. But the difference is that with the diode and resistance clamper circuits have an additional capacitor. The capacitor provides the dc component from the charged stored on its plates. In today’s post, we will have a detailed look at its construction, working, and some other related parameters. So let’s get started with the Diode Clamper Circuits. 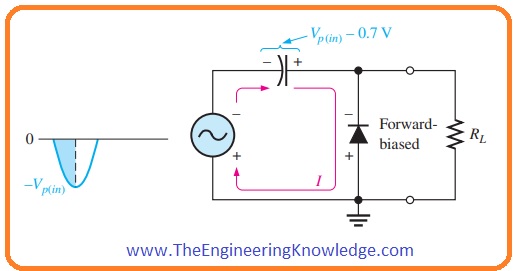 For  Input Negative Half Cycle

For Input Negative Half Cycle

For positive Input Half cycle: 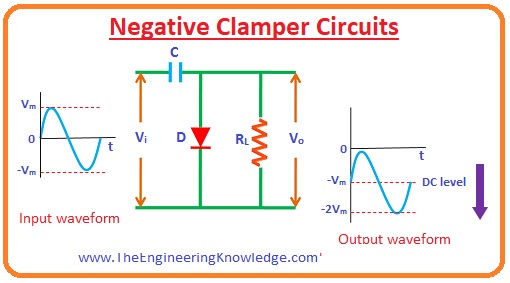 For Negative Input Half Cyle: 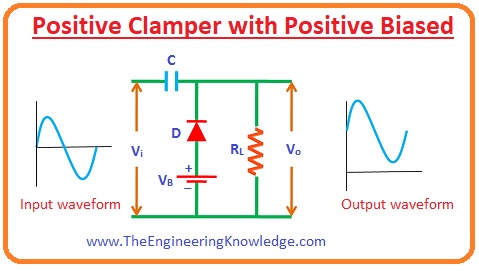 For Positive Input Half Cycle For Positive Half Cycle: 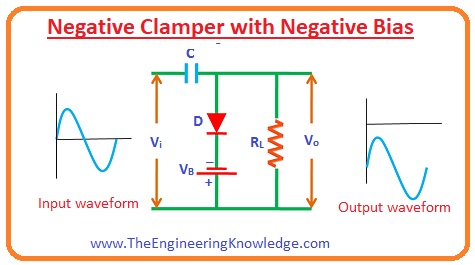 For Negative Half Cycle: