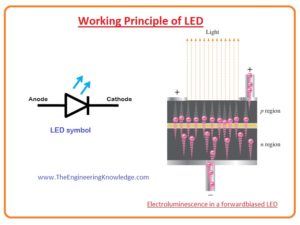 Hello fellows, I hope you are doing great. In today’s tutorial, we will have a look at Working Principle of LED. The full form of led is a light-emitting diode it is a diode that emits light when input supply is provided. It is semiconductor devices and like other diodes has PN junction. The emitting light from a diode depends on the energy needed by the bandgap of semiconductor material. For emitting of white color light,more than one layer of semiconductor material is used and phosphor can be used. It was the time used for common purposes in 1962 but their intensity of light was less and emit infrared light.

The LEDs that emit infrared light used in remote control circuitry, like remote of your LCD, etc. Currently used LED emit light of ultraviolet, visible and infrared wavelength. Older types of LEDs were used in different small size incandescent bulbs, indicator lamps, and 7 segments displays. Nowadays LEDs producing high-intensity lights are used in buildings and rooms for illumination. There are numerous benefits of LEDs over incandescent lights such as less power usage, longer operating life, less dimensions, etc. The diodes are used traffic signals, cameras, different medical instruments. In today’s post,we will have a detailed look at its working, applications, and some other related parameters. So let’s get started with Working Principle of LED. 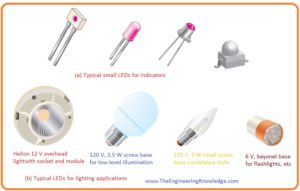