Hello friends, I hope all of you are fine. In today’s tutorial, we are gonna have a look at Synchronous Generators Parallel with Same Size Generators. As we discussed in the synchronous generator operating alone  article that the when a single synchronous generator is working in system the active power (P) and reactive power (Q) provided by the generator both remains constant, constrained to be equivalent to the power required by the load, and the frequency  and output voltage VT were altered by the governor and the field current of the generator.

In the article Operation of Generators in Parallel with Large Power Systems, we also discussed that the frequency and output voltage was constrained to equal to the large power system, and the active P and reactive power Q were changed by the governor of the generator and the IF. In today’s post, we will discuss if we connect the generator parallel with another same size than what will be the effect on the terminal voltage, active power, and reactive power. So, let’s get started with the Operation of Generators in Parallel with Same Size Generators. 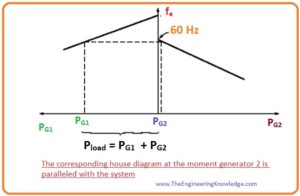 What happens if the governor set points of G2 are increased? What happens if the field current of G2 is increased? How can the power-sharing of the power system can adjust independently of the system frequency, and vice versa? 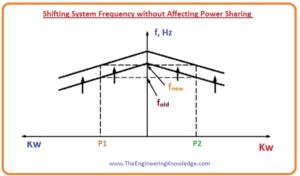