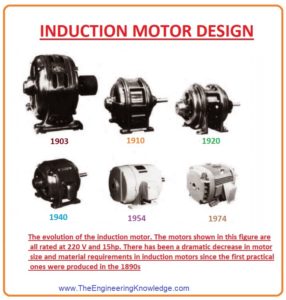 Hello, fellows, I hope all of you are having fun in your life. In today’s tutorial, we will have a look at the Induction Motor Design. In 1880 Nicola Tesla (who was an American Engineer) gave the basic principles of the induction motor, in 1888 due to his ideas on the induction motor he received a patent. He offered the paper to the American Institute of Electrical Engineer in which he explained the working principle of the wound rotor induction motor. He also explained the working principles of the synchronous motor and reluctance motor.

Though the elementary knowledge of the induction motor as defined in 1888, the motor itself did not spring forth in the complete arrangement. There was an early era of fast progress, followed by a sequence of sluggish, evolutionary developments that have continued to this day. So let’s get started with Induction Motor Design.

How to Improve the Efficiency of Induction Motor

It is the complete article on the Induction Motor Design if you have any questions about it ask in comments. Take until the next tutorial, starting method of induction motor.