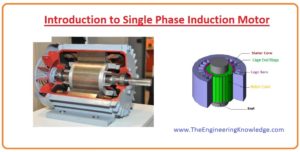 Hello friends, I hope all of you are doing great. In today’s tutorial, we are gonna have a look at the Single Phase Induction Motor. Nowadays in our houses and in some small industries, single-phase power is used instead of the 3-phase. As the single-phase networks are less costly then the 3-phase system and most appliances used in our homes, shops, offices are designed to operate on the single-phase supply.

Why a Single phase induction motor not self-starting?