What is MCB breaker: Full Form of MCB in Electrical, Working, Types, Applications Hello, fellows, I hope all of you are enjoying your life. In today’s tutorial, we will have a look at the Full form of MCB in Electrical its construction, applications, and uses. The full form of MCB is Miniature Circuit Breaker, any type of circuit breaker is a switch that operates automatically in case of excessive current flow through the circuit due to overloading or short circuit. The operation of the breaker is similar to the fuse to break the circuit as some non-favorable conditions occur in the circuit like over current flow when fault removed it again restore the circuit normal condition.

There are numerous size and design of breakers are exits in the market according to circuit requirements. Small size circuit breakers used to provide protection such circuits where less value current is used and if any circuit breakers are assembled in a large array or board then this assembly called switchgear is used to protect large circuits. Switchgear are installed at the grid stations to protect incoming and outgoing feeders. There are numerous types of circuit breakers according to current ratings and applications. In today’s post, we will have a detailed look at a miniature circuit breaker and its related parameters. So let’s get started with the Full Form of MCB in Electrical. The design of contacts is such that they move the arc towards the arc quenchers or chutes that will remove the arc in the breaker. 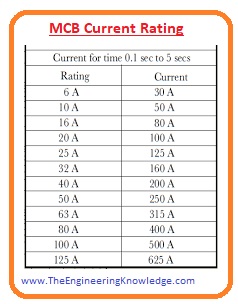 So that is the detailed post about the full form of MCB in Electrical if you have any questions about MCB ask in comments. See you in another interesting post. Have a good day. Thanks, for reading.