Hello, friends, I hope you all are doing great. In today’s tutorial, we will have a look at the Full form of RAM its practical implementation, applications, and uses. The full form of RAM is a random access memory in 1947 first time in the world ram was created by  Freddie Williams and its name was Williams tubes due to its inventer. The data storage was done by this ram in the form of charged particles on the surface of the cathode ray tube. This memory was called random access as the electron beam produced by the cathode ray tube can read the electrically charged data in any order. The data storage capacity of this first ram was about some hundred to thousand bits, but its operating speed and less power-consuming capacity were better than the older Vaccum tube latches.

Ultrasonic delay lines, Relay, mechanical counters were used in computer as a memory before the invention of random access memory. Delay lines can only generate data in a sequence as it was stored. In 1947 Frederick Viehe invented the magnetic core memory type of ram and its 2nd most used memory. For data storage in this magnetic core memory, metallic rings and wire were used. Only a single bit stored in a single ring and can get at any time. The random access memory we are now using created by Robert Dennard in 1968 and known as solid-state memory and also called dynamic random access memory (DRAM). In today’s post, we will have a look at its working, comparison with other memory storage and applications. So let’s get started with the Full Form of RAM. Difference between SDRAM and DRAM Difference between ROM and RAM 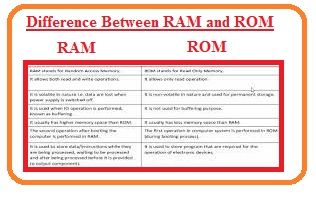 Difference between RAM and Hard Disk 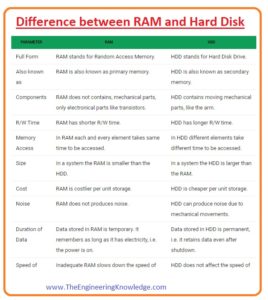 So friends that is the detailed post on the Full Form RAM I have written each and every parameter related to RAM. If you have any queries about the Full Form of ram and its other parameters ask in comments. See you in the next tutorial. Thanks for reading. Have a good day.