What is EMI in PCB and Its effects on PCB EMI stands for Electro Magnetic Interference also referred to as radio frequency interference. It is disruption created by some outer causes which have an impact on electronic circuits due to electromagnetic induction. EMI has reduced the operation and reliable behavior of the circuit where it works. To make circuit boards efficient there must reduce this fact during PCB construction.

For data path, EMI can range from the increment in faults rate to net losses of data. Human and natural causes produce electrical current and voltage that resulted in the EMI like mobile communication systems, ignition systems, lightning, solar flares, etc. EMI normally disturbs the AM radio signals. That also has a bad impact on mobile phones signal transmission, FM radio, TVs with that atmosphere science.

EMI is caused due to interaction of electricity and magnetism. Every electrical flow causes a small magnetic field. As a result, the moving magnetic field causes a current. On these principles, motors and generators operate. So all electric conductors can function as radio antennas. High-power electrical and radio signals have bad effects on different electronic circuits.  As electronic circuits are small size high speedy and compact so they become sensitive to these effects that produce the EMI

EMI is not a good factor for different electronic devices to operate well. Since PCB is used in different medical instruments circuits and military operations so they must have less faults to operate well. So engineers make such precautions to avoid these issues.  There are some factors that produce the EMI that must know to reduce EMI from circuits

If the design of PCB boards is not configured properly there must be some signal not moving in the circuits and causing interference resulting in EMI. Make sure that there is sufficient grounded plane connected with every component connect on board.

With that have effective trace paths that avoid the radiation of EMI. For this bend traces to larger than forty-five degrees at one point. 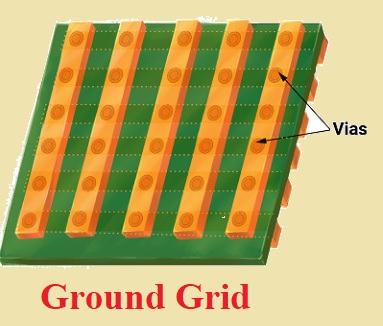 Broadband interference has an effect on the larger data signal transmission. While narrowband signals can affect a certain part of the bandwidth.

How to Reduce EMI in PCB Boards

The electrically conductive surface connected with the electrical ground is called the ground plane. For PCB boards ground plane is created through the use of a copper layer. That is connected with the power supply ground point and provides the return path for current from different elements, and parts of the circuits connected on board. If you have a larger size of ground plane there is will be less issues of electrical noise, interference due to ground loops, and crosstalk in circuits. When digital circuits change their state current pulses will pass through devices to the ground point. The high impedance will cause high voltage losses, which will produce a larger noise. By providing a high conducting area, interference can be decreased. Some other techniques for enhancing the operation of ground planes are

Applications of multiple layer board

Use of split ground

Connect the split ground plans with a single connection

The other method to avoid the EMI in PCB boards is to use a trace layout. The traces are conductive paths. If circuits are active they consist of electrons. The bending of the trace layout can cause the creation of an antenna. For the creation of trace, layout follow some rules

Make separation among the signals

There must have partitions among the high-speed components

EMI is generated in numerous devices. To reduce its bad effects on circuits, there is not to enhance the electromagnetic compatibility, or circuit design configuration to faces less faults in circuits through the use of shielding. By applications of shielding, we can protect the receiver to have outer electromagnetic signals or avoid high signals having an impact on different electronic components. The use of EMI shielding coating can save different PCB components like connectors and cables among the PCB boards.

A good PCB shielding process can be get if we use a dual-fire process and deep coating.

The main types of EMI are discussed here

Narrowband EMI that caused by the transmission signals of radio, TV, and cell phones.