The JFET is a voltage control device it used in different electronic circuit and projects as switch and amplifiers. In today’s post, we will have a detailed look at the different biasing methods used for JFET and their relative parameter So let’s get started with JFET Biasing Method. 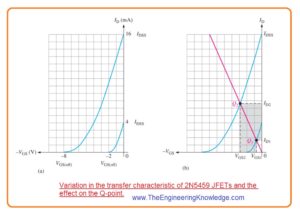 So that is all about the JFET bias method if you have any further questions ask in comments. Thanks for reading.