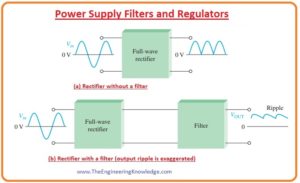 Hello, friends, I hope all of you are enjoying your life. In today’s tutorial, we will have a look at Power Supply Filters and Regulators. In previous tutorials, we discuss half-wave rectifiers and full-wave rectifiers with the detailed. Half wave rectifier is circuitry that transforms positive half of the input signal of AC signal into the DC. The full-wave rectifier converts both halfs positive and negative half into the direct current. We also discussed that the output of these rectifiers is not pure DC and have some fluctuations in output. To remove these fluctuations power supply filters are used. The filter circuit is very important for different electronic circuits and devices as for their operation DC pure DC voltage and current needed.

In today’s post, we will discuss different types of power filters for filtration of DC output of rectifier circuits and voltage regulators to maintain the output at a certain level. So let’s get started with the Power Supply Filters and Regulators. 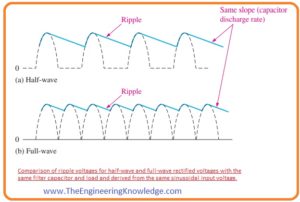 So friends that is the complete tutorial about the Power Supply Filters and Regulators. If you have any further queries about this post ask in comments. See you in the next post. Have a good day.