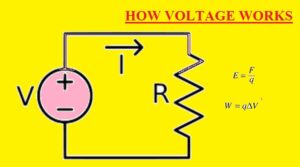 Hello, readers welcome to the new post. Today we will discuss HOW VOLTAGE WORKS. Voltage is called electric pressure, electric tension, or potential difference. It is the difference in electric potential between the two points. For static electric field, it is related to the work required per unit charge to move test charge among 2 points. The unit for voltage in the system international unit is volts. In the SI system work per unit, and the charge is called jouls per column.

In this post, we will discuss different parameters to learn the working of volts. So let’s get started with HOW VOLTAGE WORKS.

What is a VOLTAIC PILE What is the Definition of Voltage

Volts in SI Base Units Difference Between Volt and Current

What is a Common Voltage?

That is all about HOW VOLTAGE WORKS all details has explained. If you have any query ask here