Hello, readers welcome to the new tutorial. Here we will learn Introduction to UART.  The full form of UART is universal asynchronous receiver transmitter. It is a circuit configuration used in microcontrollers and not unlike the SPI and I2c that used as communication modules. Its basic function is to send and get the data in serial combination. It finest configuration is that uses 2 wires to send the data among the devices.

It is mostly employed in full duplex serial communication systems. It is a large-scale integration board that is created to perform asynchronous communication. It helps send and get from one device to other. Here we will cover the different points about the UART and its practical configuration. So let’s get started. 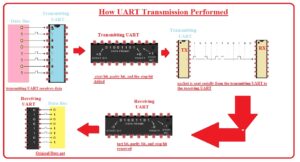 That is all about the UART. All details has been discussing I you have any question ask in the comments thanks for reading have a good day.

HOW TO DO MATH OPERATION in ARDUINO
October 9, 2022