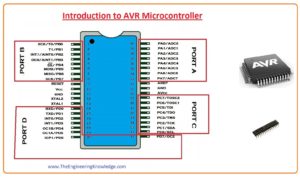 Hello readers I hope you all are doing great and enjoying your life. In today’s post, we will have a detailed look at Introduction to AVR Microcontroller. The AVR is a group of microcontrollers in 1996 the first time it was created by the Atmel. which was the first time created in 1996 and after that it was obtained by the American company Microchip Technology in 2016. It is based on Harvard architecture and eight-bit RISC (reduced instruction set computer) having a single chip.

This is the first microcontroller that uses flash memory for data storage while other controllers were used older types of memories for data storage such as ROM, EPROM, EEPROM. There is numerous common applications such as embedded systems in which it used. In today’s post, we will have a detailed look at its working, pinout, features, and some other related parameters. So let’s get started with Introduction to AVR Microcontroller. So friends that is a detailed post about AVR microcontroller if you have any further questions ask in comments. Thanks for reading. Have a good day