Hello readers welcome to new tutorial. Here we will discuss LED Control Using Arduino. Arduino is board that used to control different projects and circuits through different pins. It comes with different types of pinouts that perform different functions. Such as analog pins digital pins and some others.

Here we will make a projects using Arduino board to control the operation of LED. So let get started. 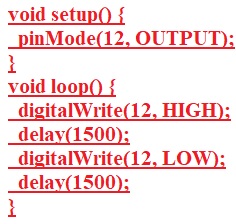 That is all about the LED Control Using Arduino. I have explained this project with detail all codes and diagram has been discuss. If you have any further query ask in comments. Thanks for reading