Hello, fellows, I hope all of you are enjoying your life. In today’s tutorial, we will have a look at the Full form of WiFi its features, and applications. Full form of wifi is Wireless Fidelity, there are many companies providing this facility and have patents so it does not has any single inventer. First time in Hawaii to interlink different islands with each other wireless system was introduced that use UHF (ultra-high frequency) for communication. The name of this first wireless network was ALOHAnet.

Now we are using wifi in our computer, mobiles, the laptop was based on this first technology used in first time in Hawaii. The real predecessor to 802.11 and Wi-Fi was created by AT&T (American Telephone & Telegraph) Corporation and NCR. That known as WaveLAN. The first version of 802.11 was created and introduced to general use in 1997 and had data transmission speed of two Mbit/s. After that, some changing were made in the second version of 802.11 that had a data transfer speed of eleven Megabit per second and introduced in 1999 and called 802.11b. In today’s post, we will have a look at its working, architecture, applications, and some related parameters. So let’s get started with the Full Form of WiFi. 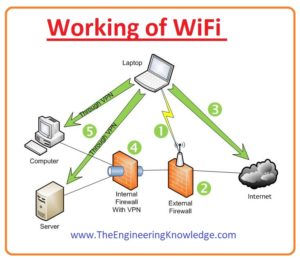 How to make WiFi secure? So friends that it is the detailed post on the Full Form of WiFi I have mentioned each and every parameter related to wifi. I tried my level best to make this post simple and easy for you. If you still have any query ask in comments. See you in the next interesting tutorial. Thanks for reading.