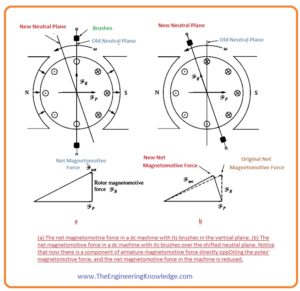 Hello, fellows, I hope all of you are having fun in your life. In today’s tutorial, we will have a look at the Methods of Improving Commutation. In DC machine the commutation is a very important process, through which alternating current production in machines is converted into DC at the output terminals. For this process, commutator segments are placed at the rotor of dc machines that converts ac into dc. During this commutation there some problems occur that we discussed in detail in the previous tutorial of commutation problems, the first one armature reaction and the second one is L di/dt voltages.

These two issues severely affect the commutation process. In this tutorial, we will discuss the solution of these issues that occurs with the commutation. So let’s get started with the Solutions to the Problems with Commutation.

How is annulment of the voltage in the commutator segments generated for all values of loads? What is the polarity of Interpol’s flux?