Hello, friends, I hope you all are doing great. In today’s tutorial, we will discuss the Difference Between LED & LCD. The basic difference between LED and LCD is that in LED there is PN junction diode that releases light when current flow through it. While for the emission of light in LED liquid crystal or plasma is used. The liquid crystal is placed among the electrodes created with the glass when the input supply is given these liquid crystals get energy and releases light.

Both LED and LCD are used to show different pictures and textual data. In LED gallium arsenide and gallium phosphide are used after getting of energy it releases light.  The LCD shown textual data and pictures in the shape of dot matrix. In today’s post, we will have a detailed look at both LCD and LED and compare them to find their differences. So let’s get started with Difference Between LED & LCD. 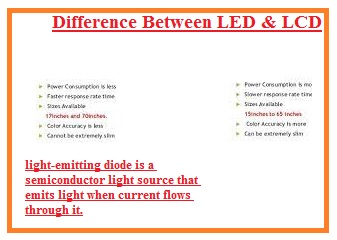 That is a detailed post about the difference between LED and LCD if you have any queries ask in comments. Thanks for reading. Have a good day.