Hi reader I hope you all are having fun in your life. In this post, we will have a detailed look at Speed Control of Shunt DC Motors. Dc motor belongs to such a category of machines that used dc power for the creation of mechanical power. In different types of industries where the load is dc operated dc motor is used.

In the previous post, we discussed the shunt dc motor with the details. In this, i will explain to you the commonly used method used for speed control of shunt dc motor. So let’s get started with Speed Control of Shunt DC Motors.

Let’s discuss these methods one by one in detail. Insertion of Resistance in Series with Armature Winding 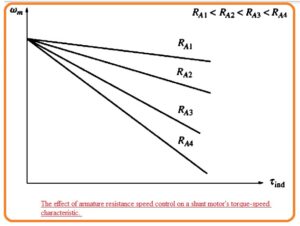 What is the Effect of an Open Field Circuit

So friends that is a detailed post about Speed Control of Shunt DC Motors. If you have any further query ask in the comments. Thanks for reading.