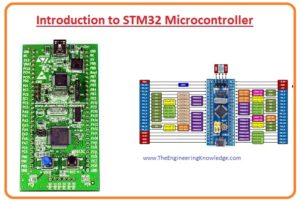 Hello, friends welcome to another interesting post. In today’s post, we will have a detailed look at the Introduction to STM32 Microcontroller. This type of microcontroller belongs to the thirty-two-bit microcontroller ICs created by the STMicroelectronics (which is a French Italian multinational electronic producer whose head office is located in Geneva). The most commonly used series of STM32 are Cortex-M7F, cortex-M33F, CortxM3, etc all these have the same thirty-two bit ARM processor core.

In the interior structure of these microcontroller processor core, static RAM and flash memory are assembled with some other devices. In today’s post, we will have a detailed look at its working applications, pinouts, and some other related parameters. So let’s get started with Introduction to STM32 Microcontroller. SO that is a detailed post about STM32 if you have any further query ask in comments, Thanks for reading. have a good day.