Hello fellows, I hope you all are doing great. In today’s tutorial, we will have a look at How Circuit Capacitances Affect Frequency Response of Amplifier. In amplifier circuits coupling and bypass, capacitors look short to ac at midband frequencies (MidBand frequency or sub-6 is spectrum used for wireless data transmission. It works among the one and six Gigahertz frequencies). For less frequency capacitive reactance of these capacitors disturbs the gain and phase shift of signals therefore they are taken into consideration. 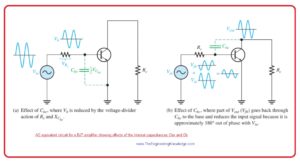 That is detailed post about Circuit Capacitances Affect Frequency Response of Amplifier if you have any question ask in comments. Thanks for reading.