Hi reader welcomes to the website. In this tutorial, I am going to share info about Introduction to Instrumentation Amplifier. The instrumentation amplifier is also called an instrumentational amplifier and written in short form as In-Amp. This amplifier is the category of such differential amplifier whose input is linked to the buffer amplifier this configuration makes it favorable for testing of different devices. This module comprises of less level dc offset, less drift, less noise distorted sound.

The graphical representation of this amplifier is like the normal operational amplifier but in practically it comprises of three operational amplifiers. In this post, we will discuss its configuration, operation working, and some other related parameters. So let’s get started with Introduction to Instrumentation Amplifier. Adjustment of Voltage Gain for AD622 Effects of Noise at Applications of Instrumentation Amplifier What is Shield Guard 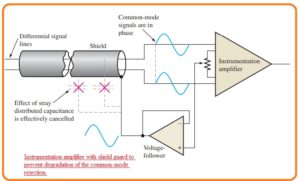 That is detailed post about Instrumentation Amplifier i tried my level best to make simple this post if you have any further query ask in comments. Thanks for reading have a good day.