Hello, readers welcome to the new post. In this post will learn the Construction of Single Layer PCB. PCB full forms printed circuit with that also called printed wiring board. Before the use of PCB for the circuit creation process was very difficult and expensive since manual methods were used to create circuits. Then with the use of PCBs, the circuit creation process becomes very easy and less expensive.

According to different features and applications different types of PCB were designed and used in different projects. Each category of PCB has its own use and applications. From basic to complicated devices are created through the use of PCBs. In this post, we will learn about the single Layer PCB its construction, applications, and some related parameters.

What is Single Layer PCB 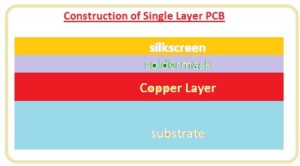 Flying Probe Testing of Board Advantage of Single-Sided Board