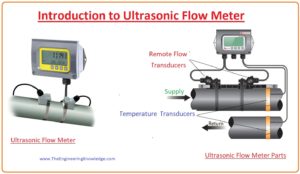 Hello, friends, I hope all of you are enjoying your life. In today’s tutorial, we will have a look at ultrasonic Flow Meter. There are numerous types of methods and instruments are used to calculate the fluid velocity. An ultrasonic is such an instrument that uses ultrasonic waves to compute the velocity of liquid to find the volume in m3 of fluid flow. This meter finds the average velocity alongside the direction of a discharged ray of ultrasound, by averaging the alteration in calculated passage time among the pulsations of ultrasound spreading into and in contrast to the direction of the flow.

An ultrasonic flow meter is disturbed by the audible behavior of the liquid and can be obstructed with viscosity, density temperature, and suspended particulates. These flow meters are available at different prices but not cost too much due to the absence of the moveable portion. In today’s post, we will have a detailed look at its working, applications, advantages disadvantages, and some other related parameters. So let’s get started with ultrasonic flow meter.

How to select the Right Magnetic flow Meter?

How to Install an Ultrasonic Flow Meter Comparison of Ultrasonic vs Other Types of Meter

So friends this the detailed tutorial on the ultrasonic flow meter I have mentioned each and every parameter related to this meter in this post. If you still have any queries about this module ask in comments. I will resolve your queries regarding this meter. Thanks for reading. See you in the next tutorial.