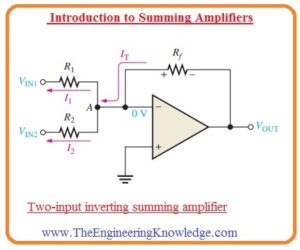 Hi, readers welcome to the learning place. In today’s we will have a detailed look at Introduction to Summing Amplifiers. A summing amplifier is a type of amplifier circuits that added to inputs given at the inputs terminals and provides one single result. At the input side, the different signal is provided in parallel combination. The two main types of circuits are used in this module first one is the inverting and second one is non-inverting.

To get output from this circuit ohm law is applied. The input signals are delivered to the input terminals through the use of resistance in the path of the signal. The parameters of the input signal are in directly proportional to the connected resistance. In today’s post, we will have a detailed look at its working, operation circuit configuration, and some other related factors. So let’s get started with Introduction to Summing Amplifiers. 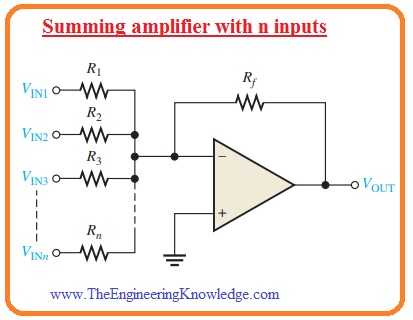 What is Averaging Amplifier

What is Scaling Adder So friends that is detailed post about Introduction to Summing Amplifiers if you have any further query ask in comment. Thanks for reading have a good day.