Hi, fellows welcome to another new interesting post. In today’s post, we will have a detailed look at Introduction to STM32F4. This module is comprised of thirty two-bit Cortex M4 central processing unit having FPU. It has a flash memory of one sixty-eight megahertz. It also comprises of flash memory, static random access memory, PSRAM, NOR memory units.

It also has twenty by thirty-two bits back up register with four kilobytes static random access memory as back up. In today’s post, we will have a look at its working, features, pinouts, and some other related terms. So let’s get started with Introduction to STM32F4. 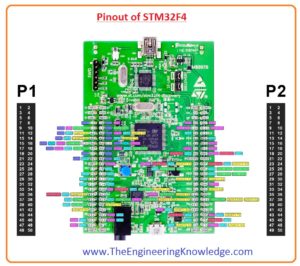 So friends it is a detailed post about STM32F4 if you have any further query ask in comments. Thanks for reading