Hello, readers welcome to new post. Here we will discuss Introduction to Raspberry Pi Pico. It is a microcontroller that is created by the Raspberry Pi having the first version. That is compatible with the Raspberry Pi RP2040 chip and its operation is based on the ARM Dual-core Cortex architecture. The operating frequency for this module is 133 megahertz. As compared to other Pi boards that are based on Linux single-board computers this board is less expensive and comes with 264 kilobyte SRAM.

In this post we will discuss its working pinout and some other features with detail. So let get started 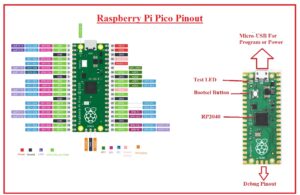 Does the Raspberry Pi Pico have an OS?

What is the difference between Pico and Raspberry Pi?

That is all about the Raspberry Pi Pico all details has been explained if you have further query ask in comments. Thanks for reading