Hello, fellows, I hope all of you are enjoying your life. In today’s tutorial, we will have a look at the Full form of LCD its construction, applications, and uses. The full form of LCD is a liquid crystal display this module consists of 2 types of the matter first is solid and second is liquid. For displaying the images it uses liquid crystals. The screens of liquid crystal have less thickness so it easily used on the screen of laptops, computers, televisions, cameras, etc. Before the invention of an LCD cathode ray tube was used in the screens of tv, the computer, etc that made the screen bulky and large but after the use of LCD, all displays have become less thick. LCD comprises different layers with the 2 polarized panel filters and probs (electrodes). The lens is used to project light on the liquid crystals.

The colored image is formed with a mixture of colored light and grayscale. There are 2 types of display in LCD first one is active matrix display grid (it uses a silicon backplane instead of  Indium Tin Oxide conductive surface) and a second one is a passive display (uses a grid of vertical and horizontal conductors consists of Indium Tin Oxide (ITO) to make an image). Most mobile phones that have liquid crystal display uses an active matrix display. In older screens still passive displays. In today’s post, we will have a detailed look at its working construction, applications, and some related parameters. So let’s get started with the full form of LCD. 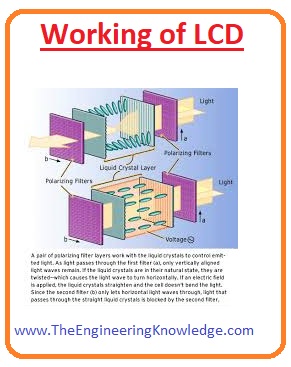 Difference between LCD and LED So friends that is the detailed post on the Full Form of LCD I have written each and every aspect related to LCD. Also,do comparison among the LCD, LED and OLED. If you have any further queries and want something else can ask in comments. Thanks for reading. See you in another next interesting tutorial. Have a good day.