Introduction to Arduino Due

Hello respected student I hope you all are doing great. In today’s post, we will have a detailed look at Introduction to Arduino Due.  It is a microcontroller based on the Atmel SAM3X8E ARm Cortex-M3 central processing unit. This first Arduino created on the thirty two-bit ARM core microcontroller is Arduino Due. In this module there are fifty-four pinouts assembled through which twelve can be used as pulse width modulation outputs pints, twelve pinouts are used as analog inputs four pinouts used as UART.

Over this board, every parameter required to operate the controller is assembled for use of these features just attach it with the computer through a micro USB for the power supply or you can deliver power through the use of ACtoDC converter. This module is operatable with all types of Arduino categories that operate on the 3.3 volts and it can be interfaced with the pinout of Arduino 1.0. In today’s post, we will have a detailed look at its working, applications, pinouts, and some other related parameters. So let’s get started with

Introduction to Arduino Due

Features of Arduino Due 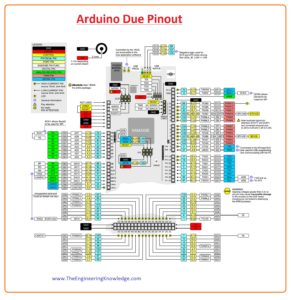 Where we can use ARDUINO DUE

Arduino Due vs Arduino Mega

Applications of Arduino Due

That is all about Arduino Due if you have any further query ask in comments. Thanks for reading. have a good day,