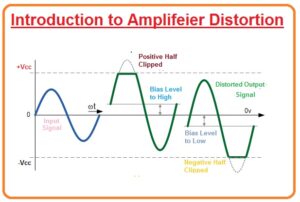 Hi, readers welcome to another interesting post. In this post we will have a detailed look at Introduction to Amplifier Distortion. Amplifier Distortion has numerous types like Amplitude distortion, frequency, and phase. For any signal amplifier to work in a proper way without any hindrance, it needs DC biasing at its Base or gate terminal. DC biasing is necessary to the amplifier so it amplifies the input signal during its complete cycle.

The amplification given by any amplifier like power, voltage amplification is the ratio of output values to input values. If we create our circuit in a wrong way and put Q point of biasing at the wrong location on line of load or if we apply voltage beyond amplifier capacity due to these effects the output signal will not create the exact desired waveform. In a simple way, we can say that it is amplifier distortion. Amplitude Distortion due to Incorrect Biasing Amplitude Distortion due to Clipping 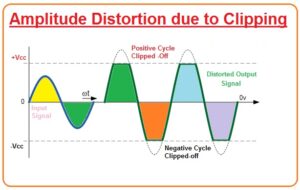 What is Frequency Distortion

Frequency Distortion due to Harmonics

Frequency distortion due to harmonics is constantly an option in amplifier circuitries comprising reactive components like capacitor or inductor. What is Phase Distortion