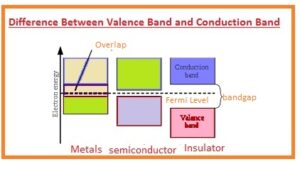 Hello guys, I hope you all are doing great. In today’s tutorial, we will discuss the Difference Between Valence Band and Conduction Band. Both valence and conduction bands are energy levels which has some amount of energy difference. the valence band denotes the energy level of electrons existing in the outermost shell or valence shell of an atom.

While in conduction band such electrons exist that take part in the process of conduction. In today’s post, we will have a detailed look at both valence and conduction band to find their different parameter and compare them to discuss their differences. So let’s get started with Difference Between Valence Band and Conduction Band. That is a detailed post about the difference between conduction band and valence band. If you have any query ask in comments. Thanks for reading. have a good day.